St. Cloud Gets “Much Needed” Win Over Gateway 22-12, Monday Night 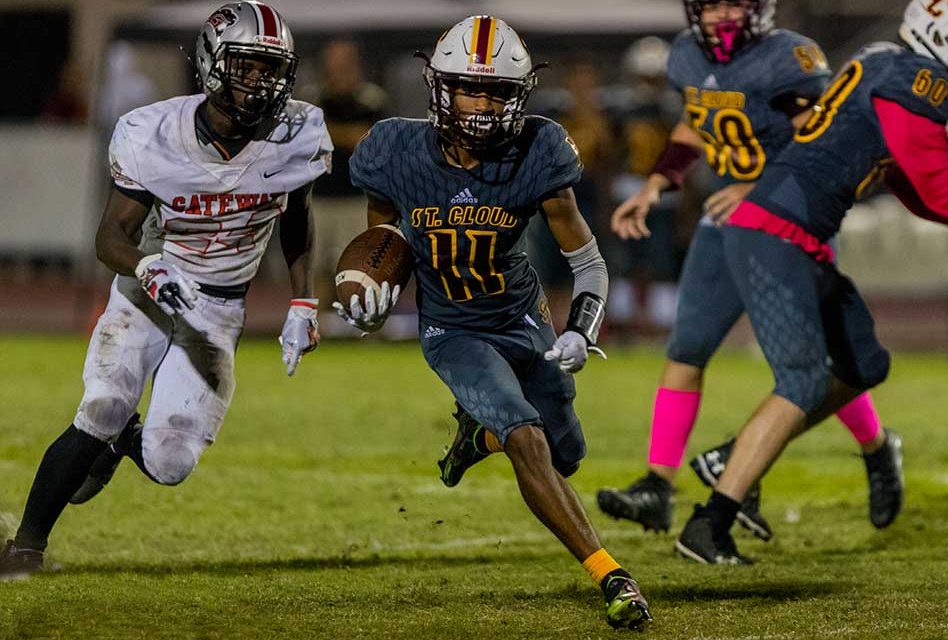 St. Cloud gets “Much Needed” win over Gateway 22-12, Monday night… that was the sentiment St. Cloud head coach Bryan Smart expressed after his team turned the ball over five times but were never in danger of losing during Monday night’s 22-12 win over the Gateway Panthers.

It wasn’t a thing of beauty, but it was a win and it was a win this team needed in the worst way. We did some pretty good things on defense tonight and we moved the ball pretty well but the turnovers really killed that momentum. The important thing is we got our first win since August and it’s something we needed for our confidence moving forward. 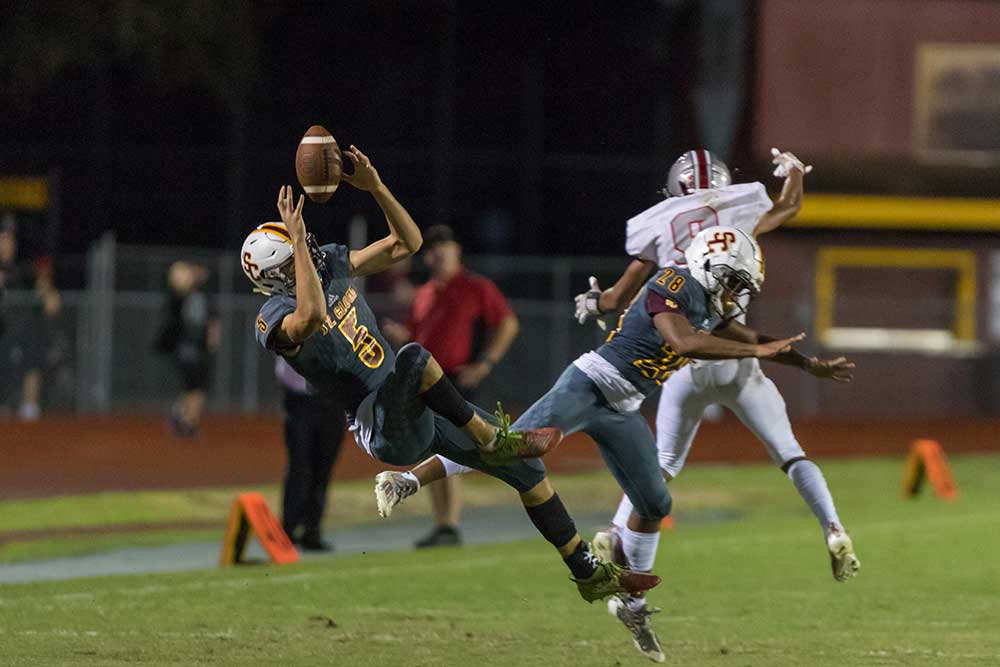 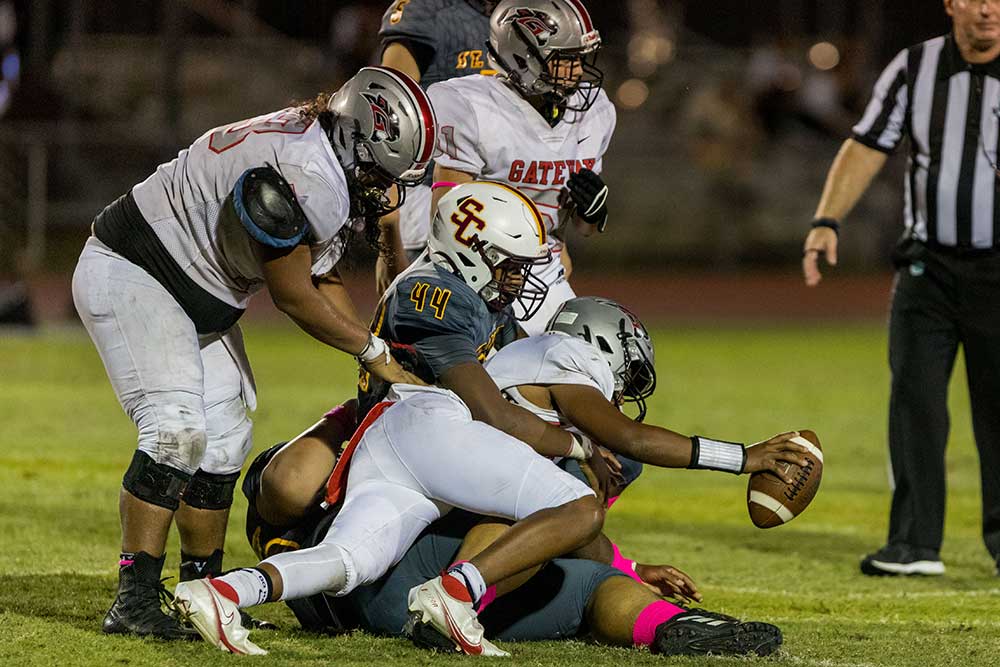 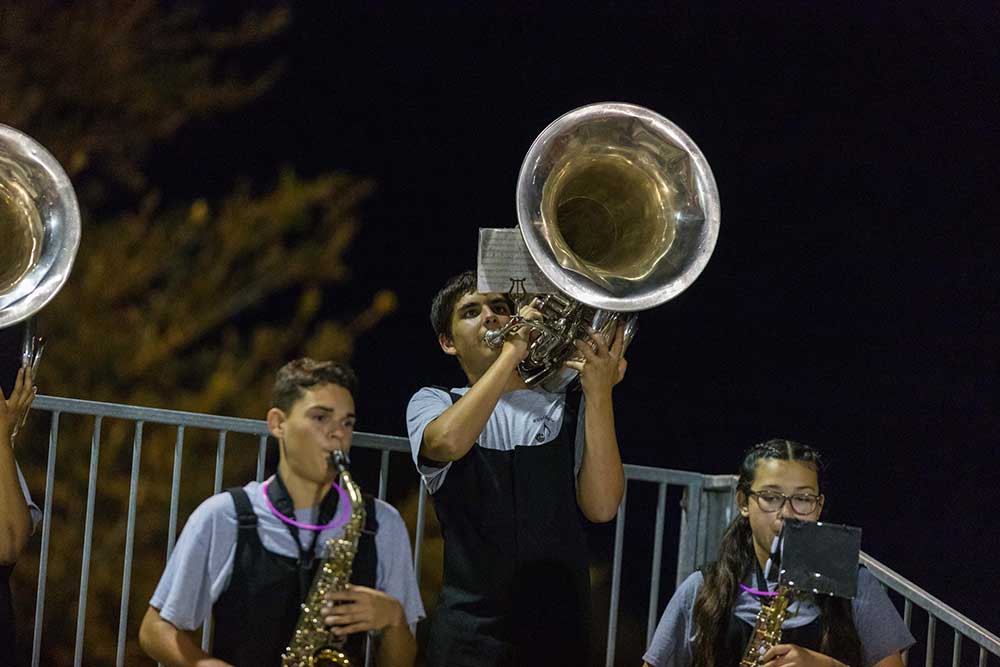 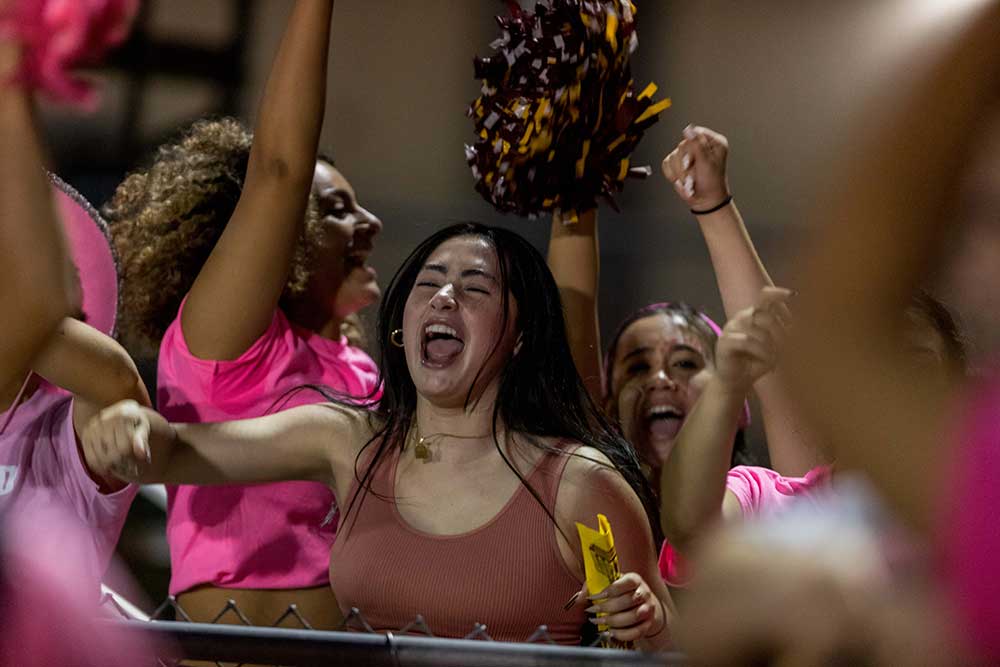 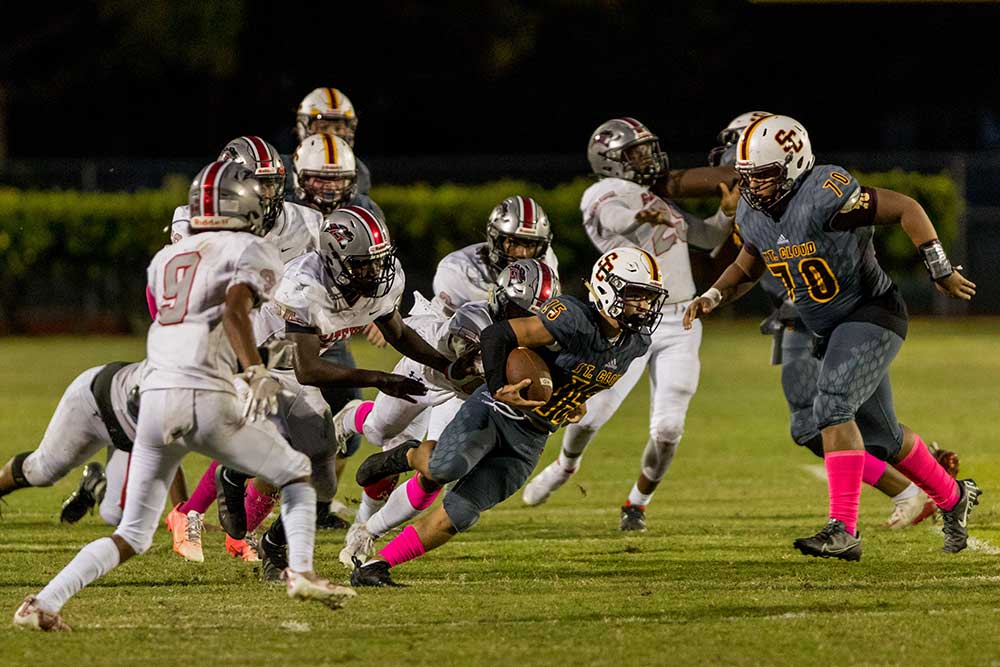 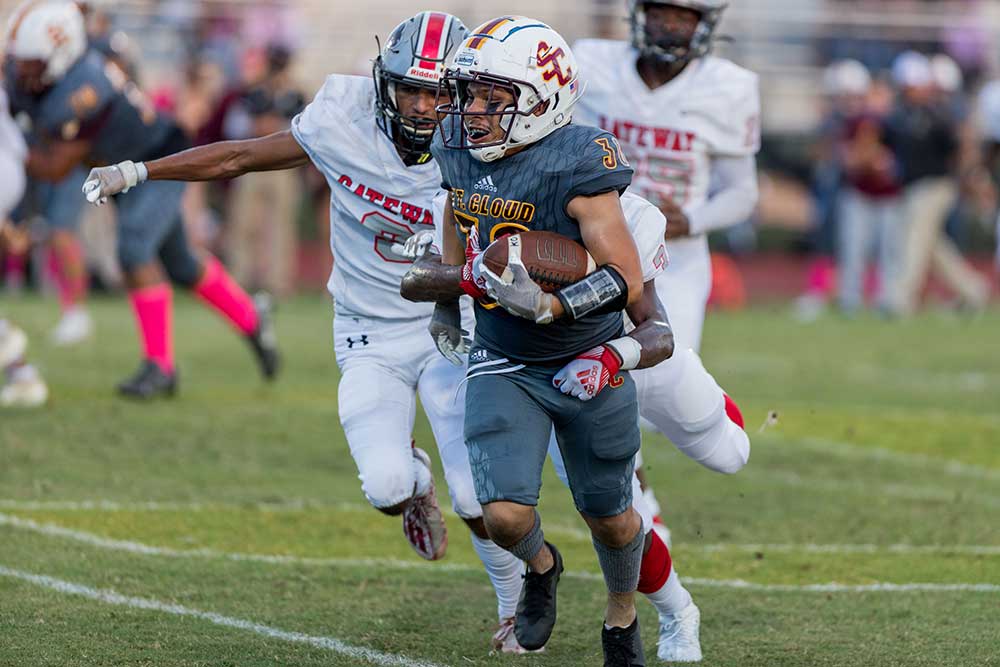 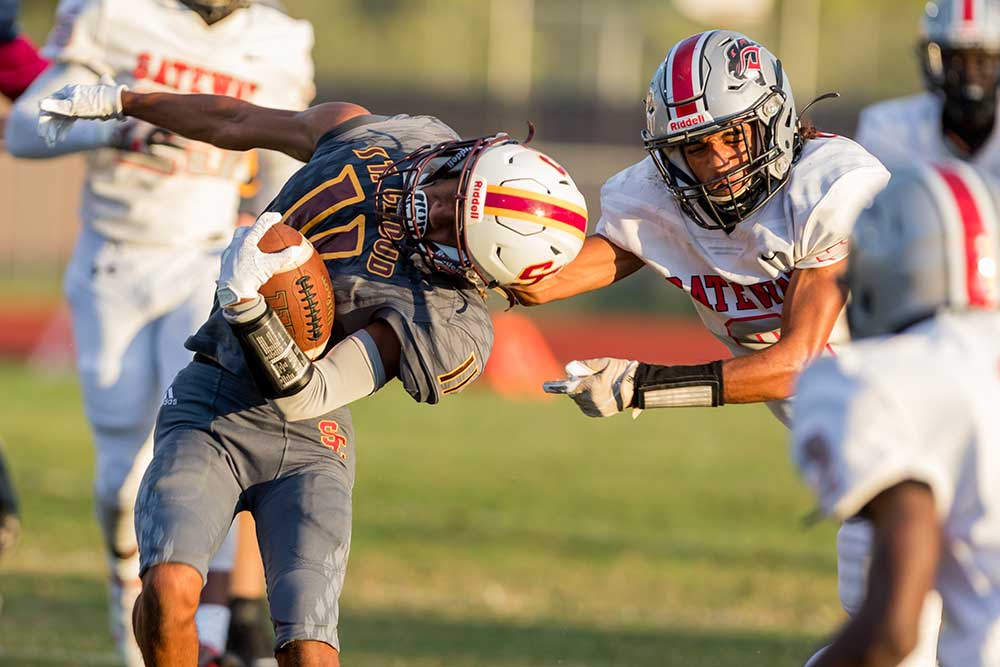 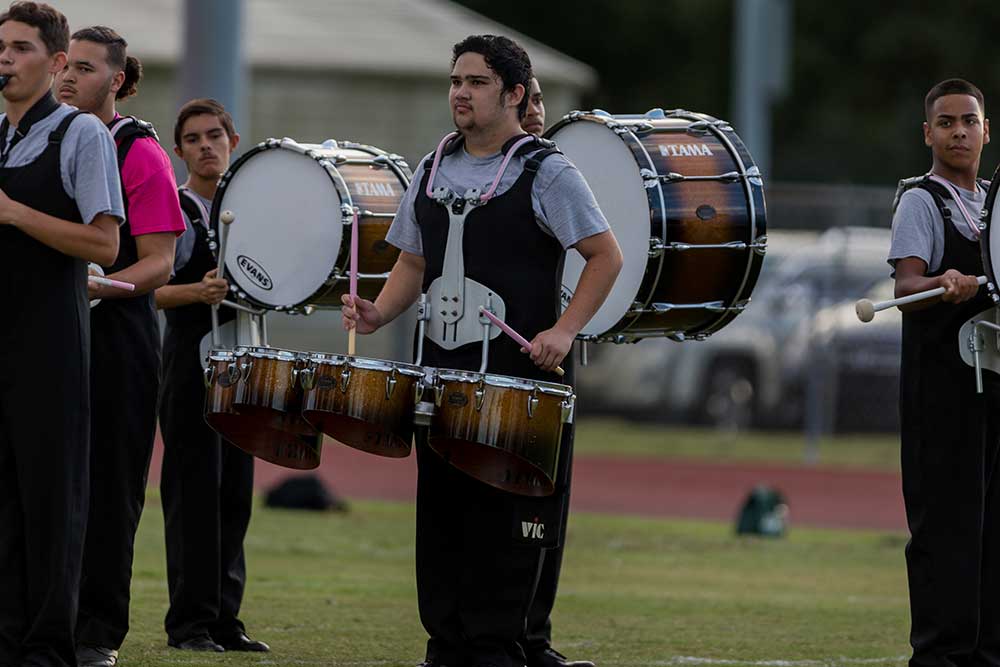 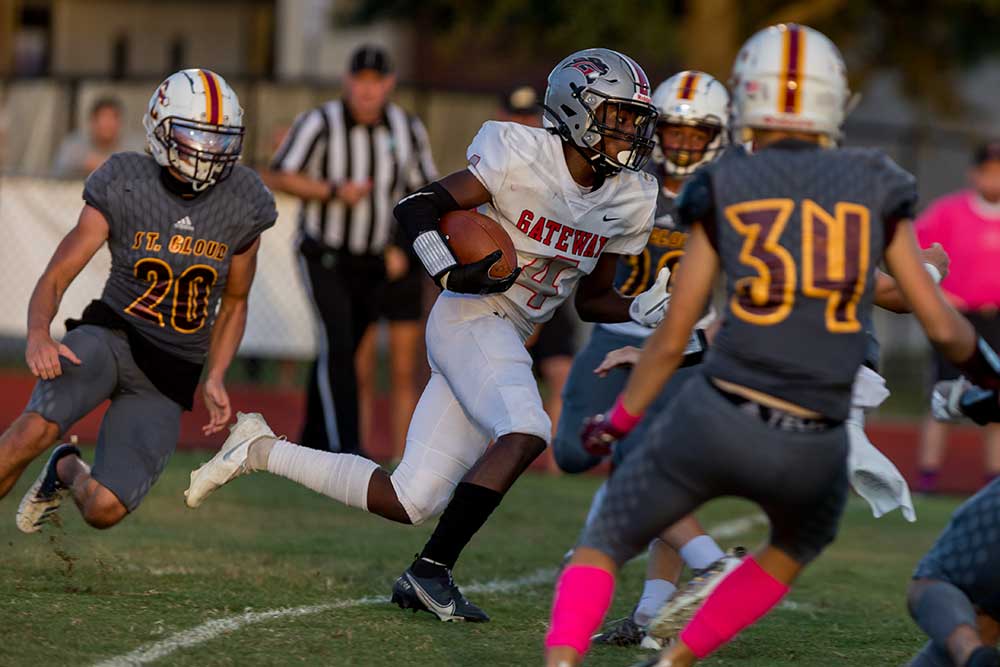 The first turnover came on the first play of the game when a center snap when sideways and Gateway recovered deep in St. Cloud territory. But the Bulldog defense held on downs and five plays later St. Cloud had a 7-0 lead as Isaac Nieves took a screen pass from Logan King and raced 69 yards for a touchdown.

It was just the third offensive touchdown of the season for St. Cloud, which had scored just 15 points in their five previous games.

St. Cloud would extend the lead to 12-0 on the half, taking advantage of a 37-yard field goal by Wyatt Castellucci and adding a safety when its defense blocked a Gateway punt out of the end zone. Although St. Cloud would turn the ball over three times in the first half, the Panthers could manage little offense – gaining just 19 yards of offense on four first-half possessions.

Like the first half, the Panthers had trouble generating any offense. In their first three second-half possessions, Gateway gained just 11 yards. The offense finally started to click on their last drive of the game as quarterback Edward Dyer completed a 44-yard pass to Azize to set up a five-yard touchdown run by Ishmail Sesay. Gateway picked up 64 of their 87 total yards of offense on that final drive of the game.

Our defense played well enough to win this game but our offensive simply couldn’t move the ball tonight. Our offensive line did not hold up well tonight and we certainly did not do very good job of taking advantage of the turnovers.

Although St. Cloud’s offense accounted for just 13 of the team’s 22 points, it was still the out-put by the unit this year. King, a freshman who was starting for the injured Jaden Morehead, completed 11 of 16 passes for 130 yards and a score. Nieves had 100 yards of total offense and Anthony Morales had 50 rushing yards on just six carries. Castellucci had two field goals and had a third called back for a penalty.

“We moved the ball okay tonight but the turnovers hurt a lot,” Smart added. “For a lot of the game we have four freshmen on the field on offense and when you are playing that many young kids, mistakes are going to happen. We did what we had to do to win and that’s the important thing.” 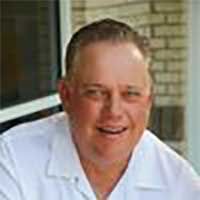 J. Daniel Pearson, a long-time resident of Osceola County, has joined Positively Osceola as a freelance contributor. His JD’s Monday Morning Musings column is a regular feature and he will be covering events for us throughout the year. Dan is a former Public Relations Specialist for Florida State University, Boardwalk and Baseball, the Florida Sports Hall of Fame, the Orlando Predators, and other professional sports teams and has been a freelance reporter to many newspapers in the state. 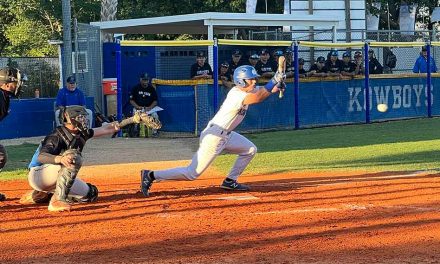 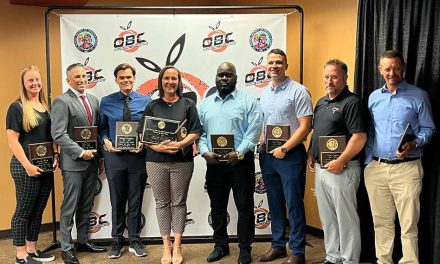 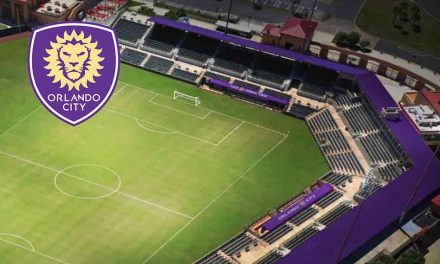