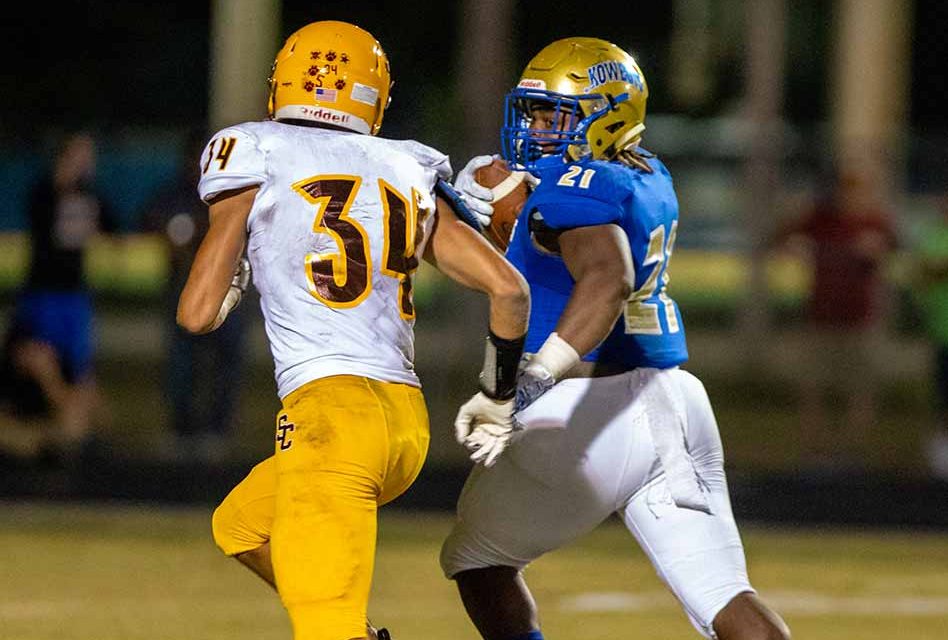 If Osceola Coach Doug Nichols challenged his players this week to start fast against longtime rival St. Cloud Friday, his players took it to heart — and to the Bulldogs.

The Kowboys dominated their 96th meeting all time with the Bulldogs right from the opening kickoff, scoring 26 points in the first 7:07 of the game — needing just seven plays that counted to do it — and cruised to a 43-0 victory. It’s OHS’ ninth victory in a row in the series, and they now hold a 68-24-4 mark all time.

“The kids played awesome, we played well from the get go,” Nichols said.

On the third play of the game — after a TD run on the first one came back on a penalty — quarterback Devon Wells hit Koby Smith on a seam route that turned into a 70-yard scoring strike. St. Cloud went three-and-out and after a short punt, DeWayne McGee rumbled on a 30-yard TD run. Roshaun Dudley went in from 30 yards on Osceola’s next drive, and after forcing another short punt, Wells ran for 43 yards to set up Ja’Randy Swint’s 2-yard run on a sweep that made it 26-0 with 4:53 still left in the first quarter.

Wells scored from 21 yards out early in the second quarter and the rout was on.
Osceola is back at home next week against Freedom in a District 8A-6 game that’s the only home game in town; St. Cloud travels to Melbourne for an important 7A-5 game.

Boone 49, Gateway 35: The Panthers showed life against an Orlando team that’s played a difficult schedule, putting up their highest point total all season, but it wasn’t enough to get their first win of the year.

Philip Bangura scored on three touchdown years, Jacovi Bryant added another on an 80-yard gallup, and Hunter Knapczyk caught a touchdown pass. The teams were tied 21-21 at the half and 28-28 midway through the third quarter, but the Braves (4-3) scored on their last three possessions of the game to seal the win.
“Keep rowing the boat together,” GHS Coach Marlin Roberts told his team after the game. The Panthers go to Lake Gibson in a District 6A-9 showdown next week.
Tohopekaliga 28, Liberty 14: The Tigers (3-3) surpassed their win total from all of 2018 with four games left with the win as the Chargers (0-6) remain winless.

Ardairious Ingram got Liberty on the board first with a 60-yard run up the middle, but the Tigers scored twice late in the second quarter, and a touchdown connection from Tyler Wesley to Sir Giles helped salt the win away for Toho.

The Tigers are at Viera in a 7A-5 matchup next week; Liberty goes to Bartow in 7A-6.
Bishop Moore 41, Harmony 7: The three teams celebrating Homecoming in the county were 0-3 on the night, as the Longhorns fell to a former Orange County rival, moving to 1-5 on the year. Harmony watched the Hornets of Bishop Moore score on a 75 yard run on their first possession in the first 18 seconds of the game, and the Hornets did it again the next time they had the ball, that time on a quarterback sneak for another 60 yard run. That was the pulse of the entire game as Coach Simon’s Longhorns couldn’t find a solution to stop the Hornets on the ground or in the air.
Quarterback Chris Skeldon scored on a keeper in the fourth quarter to get Harmony on the scoreboard. The Longhorns travel to the 1-4 Palm Bay Pirates next week in a game postponed from Sept. 6 due to the threat of Hurricane Dorian.

Celebration 46, Titusville 7: Storm quarterback Will Bohn threw three touchdown passes and ran for a score as the Storm (3-3) won their second straight game. Celebration built a 21-0 lead after one quarter and 34-7 at the half.

Bohn hit Gabriel Ojeda, Greyson Labiad and Joe Hall on TD passes. O’Neil Senatus ran for a pair of scores, and Lee Smith busted up the middle on a 62-yard scoring scamper to close out the scoring and send the game to a running clock.
The Storm will play at Lake Nona in an 8A-6 game next Friday.
Poinciana 29, Lake Region 27: The Eagles rallied from a 27-13 third quarter deficit to take the win in Eagle Lake and run their record to 3-3.
Justin Carpenter fired three touchdown passes in the second half, including a 60-yard with five minutes left, to help secure the come-from-behind victory. The defense then ushered the Thunder off the field in four plays to secure the victory.
The Eagles go to Lakeland George Jenkins in a 7A-6 matchup. 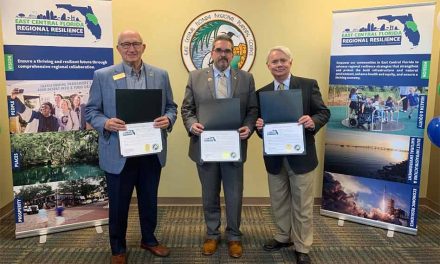 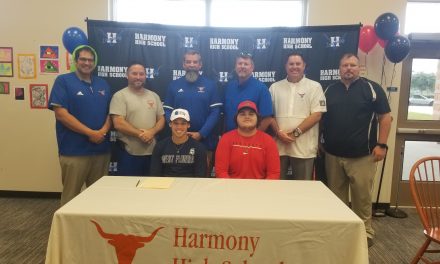