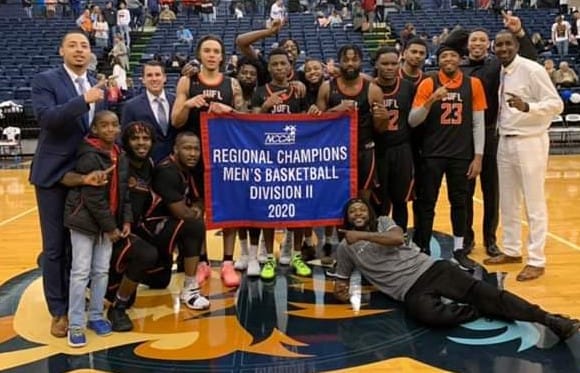 The members of the Johnson University Suns men’s basketball team will board vans for an 18-hour trip next week to Joplin, Missouri. It’s for a good reason, though. The Suns have qualified for the National Christian College Athletic Association (NCCAA) Division II national tournament.

The tournament begins on March 12; the brackets will be announced Monday afternoon. The Suns earned their way in by winning the South Region tournament last weekend in Greenville, S.C. A 72-49 win over Toccoa Falls (Ga.) College in Friday’s semifinals set up a title game against Bob Jones University, who the Suns had never beaten in six tries, including an 82-80 loss on Jan. 11.

Saturday’s game had all the drama of a postseason contests. Johnson opened to take a 7-1 lead, the Bob Jones Bruins rallied to take the lead, and then it was a punch-and-counterpunch battle the rest of the way. The Suns trailed 42-33 early in the second half, but rallied behind the scoring of freshman Freddie Word, who scored a game-high 27 points, and Raymond McLeod, who scored on a layup to put Johnson up 53-52 with seven minutes left.

There were seven lead changes from there on. Word scored in the lane with 10 seconds left to put Johnson up 68-66. Bob Jones’ final shot came up short and the Suns, who at 15-14 have eclipsed the school record for wins in a season, celebrated the win on the court. They celebrated again on campus with fellow students, who welcomed them back to the campus on Bill Beck Boulevard across from Osceola Heritage Park and the new Orlando City soccer training facility early Sunday morning.

The coaching staff is an all first-year group, including head coach Landis McCoy and assistants Dennis Diaz and Kyle Pogash, who is from St. Cloud and coached on last season’s St. Cloud High Lady Bulldogs’ trip to the Class 7A high school Final Four.