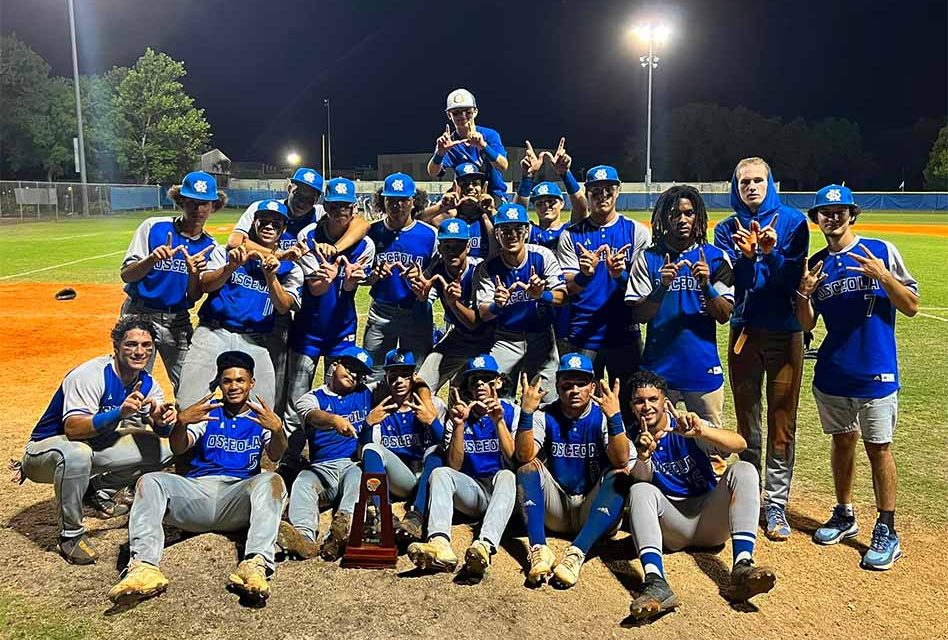 Key hitting, great defense and outstanding pitching were all on full display as the Osceola Kowboys downed rival Lake Nona, 5-0, to claim the Class 7A, District 9 baseball championship on Friday night.

Osceola, which hosted the tournament but was the number two seed, received an outstanding pitching performance by Danny Ramirez in the win. Ramirez, a senior, retired 21 of the 26 batters he faced – throwing a complete game shutout. He struck out 11, did not allow a walk and hit one batter in pushing his record to 6-0 this season, while lowering his ERA to 0.98.

For good measure, Ramirez was the early offensive star of the game – driving in the first run of the contest in the fourth inning and making it 2-0 with an RBI single in the sixth.

“It was all Danny from the beginning to the end,” Coach Scott Birchler said. “He’s a fourth year senior starter and when he gets into a groove like that he is hard to beat.” 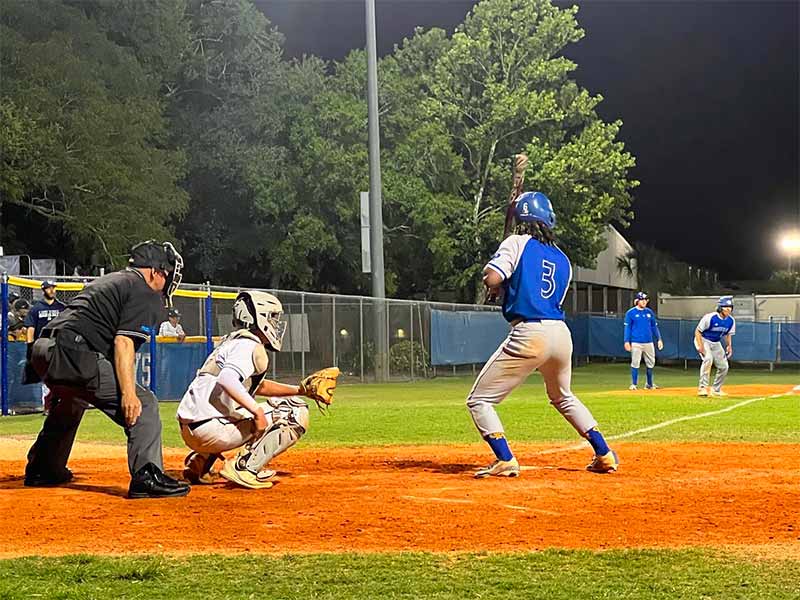 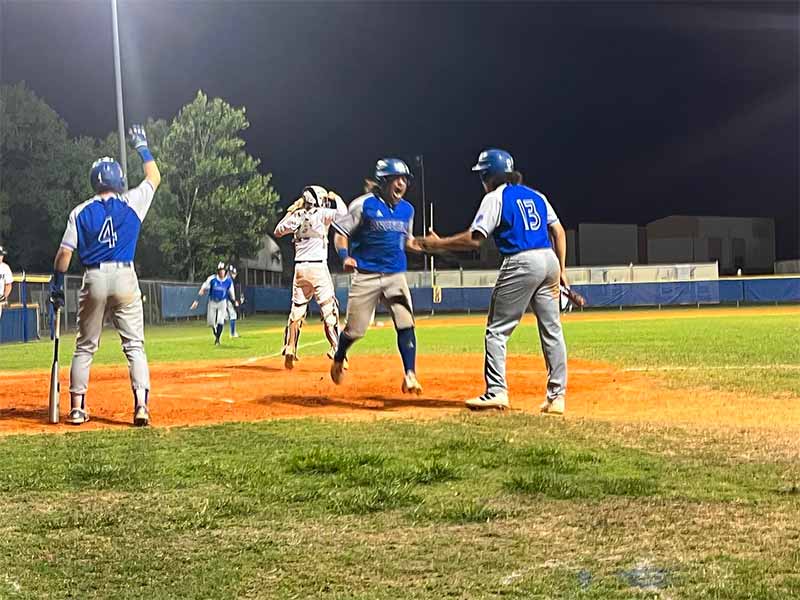 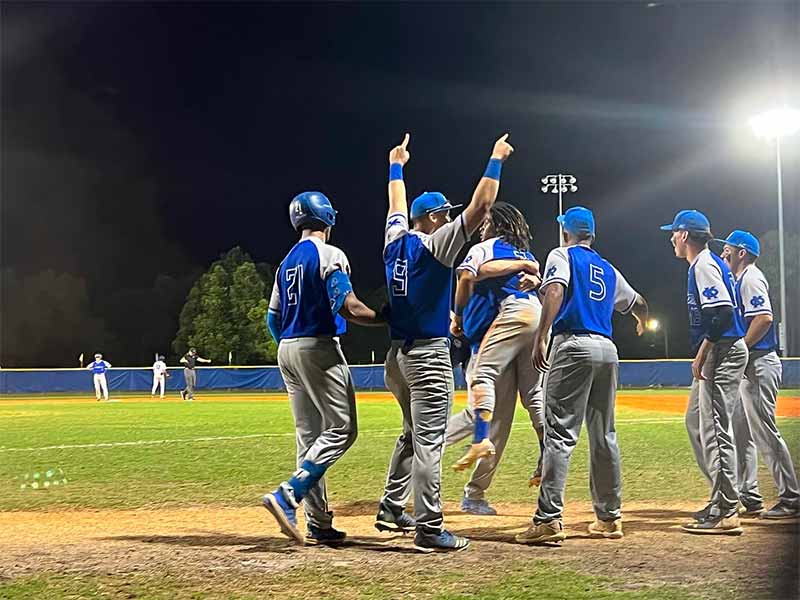 Using an explosive curve ball, Ramirez ran into any sort of trouble just twice in the game. His own throwing error on an errant pickoff attempt – the only defensive mistake Osceola made all night – allowed Omar Lopez to move from first to third with just one out in the second. But Kowboy shortstop Nick Palmi would gun Lopez out at the plate on Daniel Gomez’s ground ball and Ramirez would strike out Juan Villa to end the inning.

In the sixth, Bryun Figueroa and Humberto Segura would open the inning with back-to-back singles but Ramirez would slam the door against the heart of the Lions lineup by striking out the 3-4-5 hitters to end the threat.

“I kind of view myself as sort of a dawg on the mound,” Ramirez said. “Nick’s play in the second inning really fired me up and when I gave up those two hits to start the sixth, I really started to bear down. I just did not want to give coach a reason to take me out of the game.”

Palmi, who went 0 for 4 in the game, played a huge part in giving Osceola its first run. Leading off the fourth, he hit a routine ground ball to second that skipped between the defender’s legs. Noticing the outfielders were slow to react, Palmi never slowed down and beat the throw to second. He would move to third when Louis Rodriguez grounded out to second and would score on Ramirez’s ground out to deep short.

Aggressive base running played a role in the second Osceola run as well. With two outs in the top of the sixth, Rodriguez would slash a ball down the right field line but through hustle and determination he turned the sure double into a triple. He would easily score on Ramirez’s two-out single up the middle.

“We emphasize aggressiveness on the base paths but at the same time we teach our kids not to hesitate,” Birchler said. “If either Nick or Louis showed any doubt, they would have run into outs.”

Clinging to a 2-0 lead, Osceola would break it wide open in the top of the seventh. After two walks, a Luis Nunez single would chase Lake Nona starter Drew Rosenburg from the game. On a 1-2 count, Isaiah Jean-Baptiste would rip a double into the right-center gap to clear the bases and make it a 5-0 game.

Ramirez would retire the side in order in the bottom of the seventh for the win.

Osceola, now 21-5 and winners of 14 of their last 15, will now host a regional quarterfinal on Tuesday night. A win would put them at home on Friday in a semifinal game – which could also come against Lake Nona (19-6) — who will qualify as an at-large regional participant.

“We have had some battles with them in the last couple of years,” Birchler said. “They are a great team and play with a lot of heart and class. I would not be surprised to meet them again, but we need to take care of our business on Tuesday night first.”

Regional brackets are expected to be announced this weekend. As district champion, the Kowboys are guaranteed a Tuesday night home game in the quarterfinals. Brackets should be available by Sunday at www.FHSAA.com. 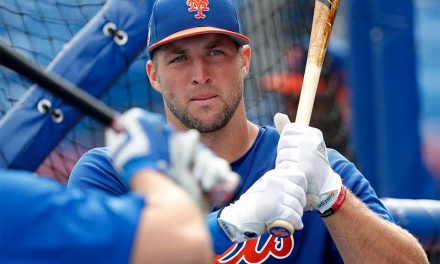