At UCF, Year 2 of Knights football Coach Josh Heupel began in earnest with the first fall practice of the 2019 season.

This gives the Knights about a month to prepare for the season, which opens at Spectrum Stadium on Aug. 29 against Florida A&M.
That works best, considering Heupel and his staff have a couple of question marks to turn into periods — or exclamation marks. A big one is the quarterback position, one already a little cloudy with McKenzie Milton’s gruesome injury in Tampa last season and the news earlier this month that Darriel Mack, Jr., the leading candidate to be behind center despite just three starts, had broken his ankle and will be sidelined for at least the first portion of the season.

Heupel addressed those concerns Tuesday — without giving an update on Mack’s condition — when he and a handful of players addressed reporters at the Knights’ fall Media Day. 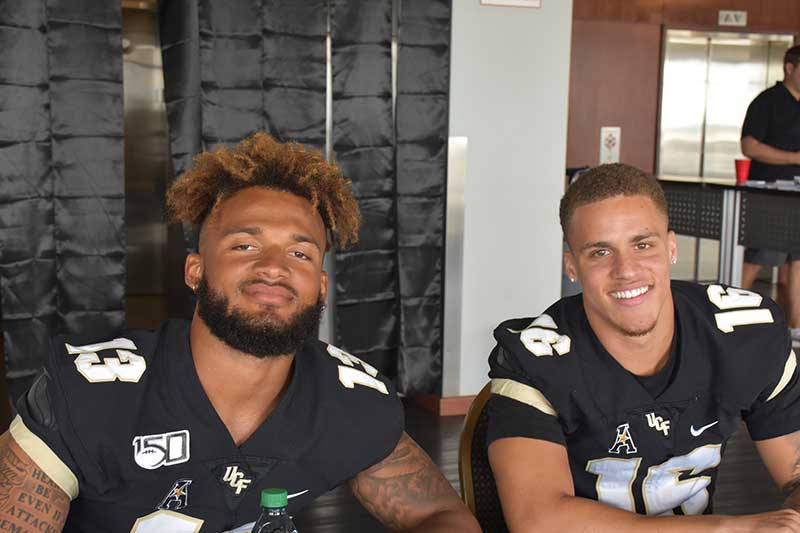 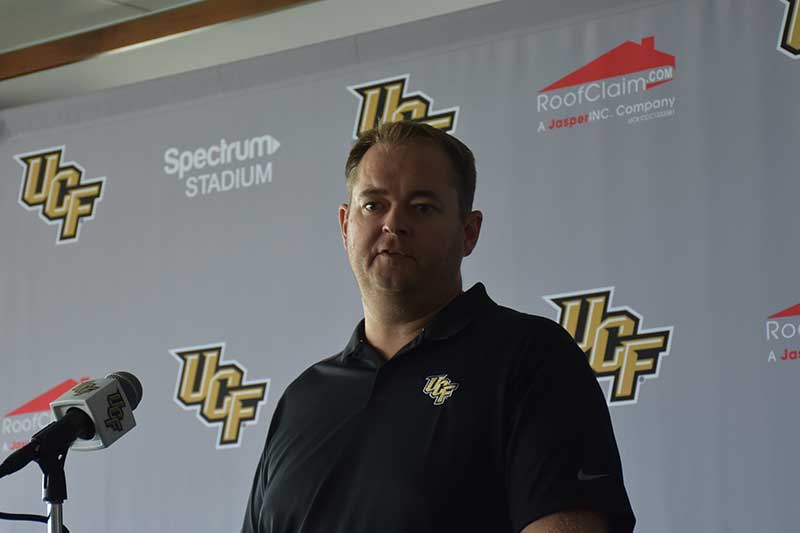 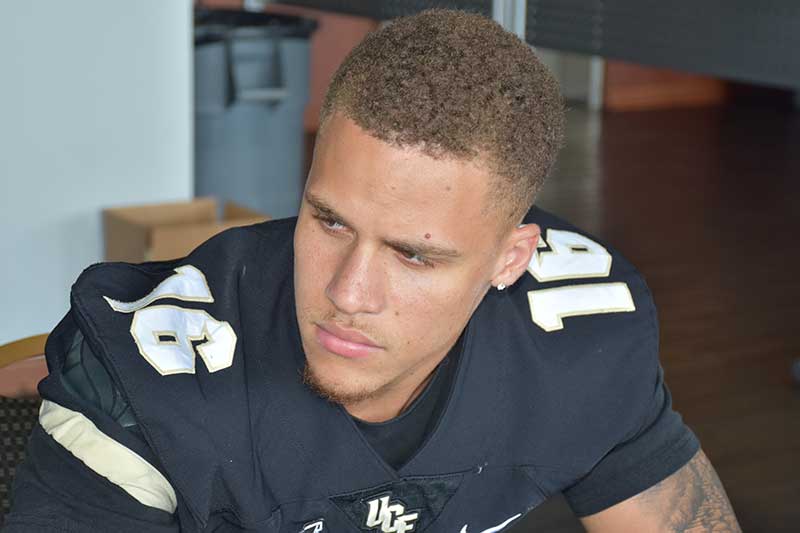 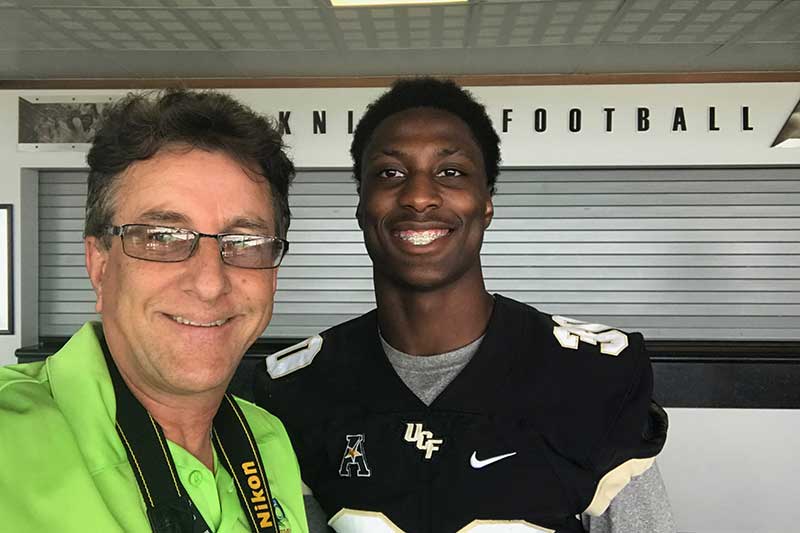 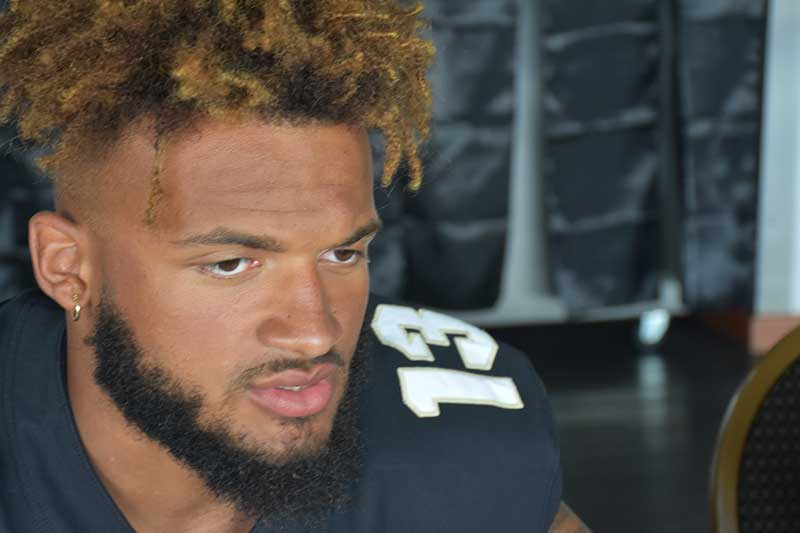 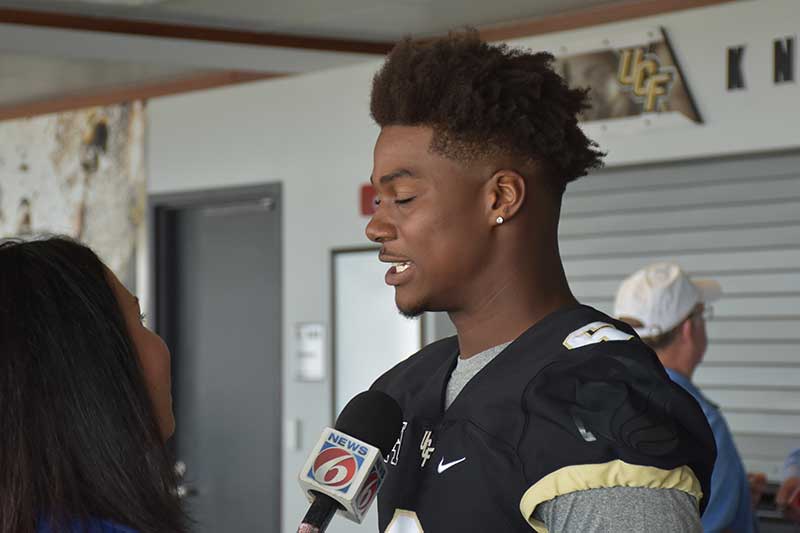 “Great competition is a coach’s best friend, it drives everybody,” he said in relation to the QB race going on among Notre Dame transfer Brandon Winbush, redshirt sophomore Quadry Jones and Hawaiian true freshman Dillon Gabriel. “We want a guy to come out prove he’s the guy to the other guys on the other side of him on the line of scrimmage. Nobody has played so badly in the spring practices that they’ve proved they’re not the guy.

“We’ll play guys who are ready. I hope somebody pulls out ahead of the rest, but I’ve got no timetable for naming my guy.”

The receiving corps, which is also adjusting to the departure of Dredrick Snelson, who left after a junior year of 43 catches, 688 yards and five touchdowns, is getting ready to open the season working with a new passer. But Gabe Davis (53-815-7) and Tre Nixon (40-562-4) said it’s a challenge easily met thanks to hard work over the summer.

“We’re ready to go. The body feels healthy and we did a lot of really good stuff over the summer. getting bigger and stronger,” Nixon said. “A lot of people weren’t aware of how much depth we had last year at the receiver position, we’re more confident in general.”

Davis said players who fans didn’t get to see much of last fall got to show out during April’s spring game.
“You saw it there. Jacob Harris had never had a start here, and he had three touchdown catches in the spring game,” he said. “Marlon Williams has been making plays. I just want to continue making those big plays and focus on the little things. This is still the team that won 25 games in a row. We still have weapons all over the field.”

Running back Greg McCrae, who went from just one cog in the backfield to a feature back coming off an 1,182-yard rushing season, said he’s prepared for what will be a more challenging season, generating more attention from defenses after last year and making sure a strong running game takes some of the pressure off a new quarterback.

“They’re talented guys in that QB room that know how to play football, being coached by some of the greatest coaches in the world,” he said. “I already knew I had to move past (last season) quickly to prepare for this season so I can improve, do all the things to get better. I will be there for them and ready when they need me.”

Among Heupel’s other topics from Tuesday:

On starting a new season: “I’m proud of what the team’s done since the bowl break. We had a great offseason and summer, and we’ve seen these kids bodies change in the weight room. The next three-and-a-half weeks will be spent preparing. We’re in a race against ourselves.”

On the start of Year 2 compared to this time last year: “We were in a great place despite that everything was new. There’s nothing like going through the test of time together, what we went through last season brought the team closer together, and we came back from the Fiesta Bowl with a heightened sense of trust and togetherness. Players know the expectations, and we need our veteran players to play at a championship level.”

On the incoming freshmen class: “They joined us in June and I’m proud of what they’ve done so far. We’ll see now what they’re capable of. When players understand the ‘why’ of your system, then they buy in.”

On how McKenzie Milton will taking on more of a coaching role while he heals from his injury: “He’s still a great sounding board for the guys in the quarterback room, he’s been with talking to the guys about what they see on the field.”

On how the Knights will restock a defensive line depleted by graduation: transfers Troy Gray (Ole Miss) and Brandon Wilson (Indiana) will be in the mix there with returners Randy Charlton, Brendon Hayes and Kenny Turnier.

On the scheduling philosophy of UCF Athletic Director Danny White, which has come under fire of late: “I have great belief in Danny. This place is sold out every week. Other places that schedule differently can’t say that. UCF is now a nationally-recognized logo and brand.” 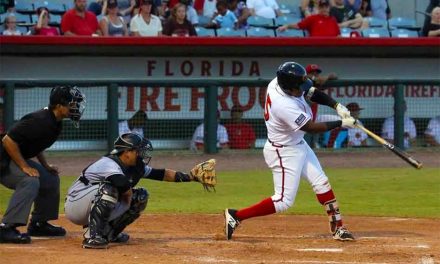 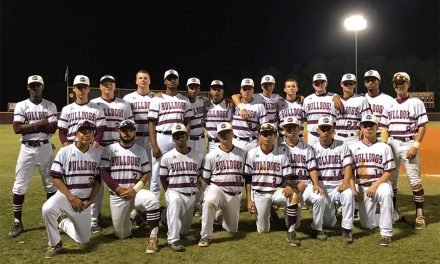 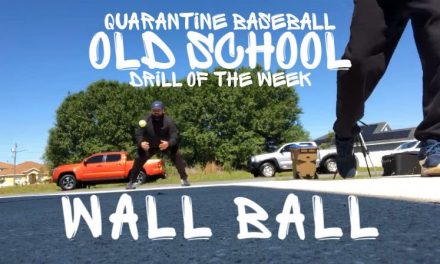 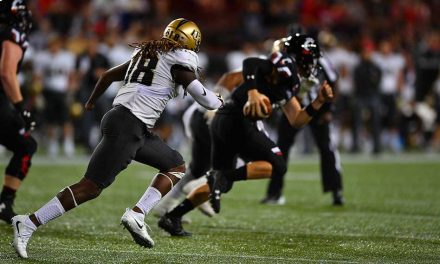